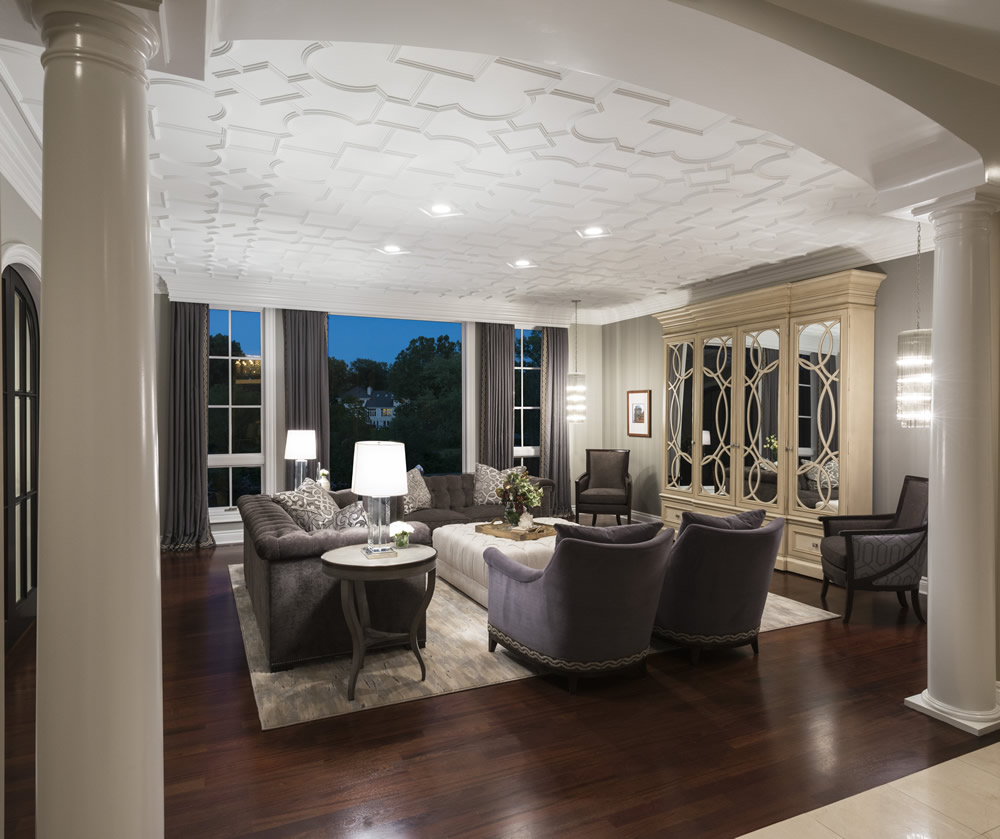 A doctor and his interior designer have just the cure for an unremarkable home: A Magnificent Makeover

When house-hunting, one might need to look at dozens of homes before finding the perfect fit. But when searching for an interior designer, how many does a homeowner really need to interview? In Dr.Louis Radden’s case, the answer is … a lot!

“I must have looked at several websites and interviewed dozens of designers about my goals for my home,” Radden says of planning his recently renovated Bloomfield Hills residence. To him, the intricacies of all that says “home” are nearly as important as the details that go into his successful Bingham Farms-based practice, Spine Specialists of Michigan.

Radden, who grew up in Palmer Woods in Detroit, believes he struck gold after meeting Northville interior designer Cheryl Nestro, of Tutto Interiors. “I felt a connection to her style,” he says. “I knew she could do wonders with this home.”

Nestro began the renovation about 18 months ago, with the goal of creating a comfortable 10,000-square-foot oasis for the busy doctor and his two teenaged sons. She is working with builder Stuart Rosenberg, of Canton-based Designer Homes.

“I started with the thought that my client is a bachelor,” Nestro says, “so I was careful to not make the home too feminine. He did want the finest of everything — the pictures he showed me of things he liked were glamorous, almost like from a different time.”

“The sense I get when I come through the front door is amazing,” says Radden, who adds that after years and years of medical school and a lot of hard work, it’s a nice place to come home to.

The renovation plan agreed to by both the designer and the doctor was to start with the lower level, creating doorwalls of glass where there used to be dull, view-blocking brick.

The space, which features a comfortable television area and an accommodating, high-end kitchen, now looks out to sprawling property and a lake beyond. (Outdoor plans include a swimming pool and basketball court, as well as extensive landscaping.)

Nestro’s biggest challenge was the transformation of the 3,800-square-foot lower level. “We had to consider structural engineering and physical aspects when recreating the space and adding doorwalls,” she says. “Plus, Louis (Radden) didn’t want to hang out in a basement that was going to be cold and drafty — and with all that glass, it could have had that tendency. So we had to build a trust level. I told him, ‘When we blow out the back of your house, it will be a good thing!’ Before, it was chopped up; now it’s all open,” with 9- and 15-foot doorwalls.

Also on the lower level is what Radden calls his “hotel-ish” guest room. Striking in its color palette, the silvery-gray room is a favorite spot for the man of the house — and his sons think it’s pretty cool,too. “I think they like it because it feels like a hotel in South Beach,” Radden says, adding, “The carpet is so plush.” Nestro waved her glam wand to create luxe at every turn, including Riemer Floors (Bloomfield Hills) carpeting and a tufted, custom-made headboard and bedding by Eva Helminen of Commerce-based Designs De- signs (fabrics from Robert Allen/Beacon Hill).

What once was a theater room in the lower level now is a cavernous basketball court (a half-court with maple flooring) that gets regular use by the doctor, his sons, and their friends.

Radden wanted padded walls, so Nestro again called on Designs Designs. Next to the gym, Nestro designed a new theater that’s even more accommodating than the former.

“My house has become a gathering spot on weekends,” Radden says with a laugh. And with a large family and lots of nieces and nephews, he contends the home is undoubtedly a family-style Mecca, throughout the year.

Returning to the first floor, the gathering space, just off the foyer,is a bit evocative of a fine men’s apparel shop. “I dress conservatively; I don’t wear reds, purples, pinks,” Radden says, “nor do I want those colors in my home.” Nestro chose a palette of warm beiges, cool grays, and rich charcoals for many of the home’s accents. “I wanted elegant but comfortable,” Radden says.

“And he loves tufted items,” Nestro adds.
“Everything he showed me was tufted.”

Other considerations reflect the doctor’s ergonomic focus. “I guess it’s because of my background, but I naturally think of things like seating, where your knee is not higher than your hip,” he says. “It’s difficult to get out of seating that doesn’t meet those standards — a lot of my family members are in their sixth and seventh decade of life, so those are things to think about. My goal was to appeal to everyone, not just me.”

As for the kitchen and its complementary cabinetry, Nestro views it with bittersweet thoughts. “He fought me on the kitchen,” she says, tongue-in-cheek. “It was originally all cherry wood, and nothing went with it. So we refinished all the cabinets in a dark gray tone. He was concerned the cabinets wouldn’t be able to take the color.” But they did, thanks to painter Robin Johnston of Faux Couture. Now, the space is a nice spot in which to nosh on the chef’s daily special.

Nestro and Radden agree that lighting is one of the most important details in the home. In the dining room, for example, Radden originally wanted a more traditional, crystal chandelier, but Nestro chose a custom Venini-style glass chandelier and sconces with an art deco twist.

In the main-level gathering space, Nestro added drama with a long, modern chandelier that hangs near the media cabinet. In the lower level, a bubble-glass chandelier above the island is a conversation piece. Bling chandeliers that hang above the nightstands light the guestroom.

“Overall — and there’s still a bit of work to do — I feel my house has evolved into something that I never imagined it could be,” Radden says. “And that’s the beauty of working with an accommodating and talented interior designer.”